Moyes spent 11 years in charge of the Merseyside club from 2002 to 2013 and is still regarded fondly by Everton fans.

But his relationship with Everton’s current boss Rafael Benitez is less cordial after the Spaniard irritated Moyes by labelling the Toffees a small club during his time at Liverpool.

Benitez apologised for that comment after his controversial appointment as Everton boss in the close season.

But, with that spat in mind, Moyes may well have taken extra satisfaction from a victory that moved West Ham above Everton into sixth place in the Premier League.

Benitez was unbeaten in his last nine league meetings with teams managed by Moyes, winning five in a row before this weekend’s encounter.

His dominance over Moyes came to an abrupt halt as Ogbonna headed home with 16 minutes to play, extending West Ham’s unbeaten away record in all competitions this term.

The east Londoners have won five of the six games on their travels, while Everton slumped to their first home defeat this season.

“It is great. We want to keep fighting and do well in the league and in Europe as well.”

Everton should have been buoyed by an impressive 1-1 draw at Manchester United in their last match before the international break.

But they made a slow start as West Ham held almost 80 percent of the possession in the early stages.

Demarai Gray has impressed following his move to Everton and the winger left Ogbonna trailing in his wake before whipping over a low cross that Alex Iwobi should have converted.

Everton’s Andros Townsend danced his way to the byline for a cross that Abdoulaye Doucoure headed narrowly wide.

Moyes’ men thought they had taken the lead when Jarrod Bowen’s shot was pushed out by Jordan Pickford for Tomas Soucek to net the rebound, but the Czech midfielder was correctly ruled offside.

Townsend carried a threat for Everton on the flanks and his cross was glanced inches wide by Salomon Rondon soon after the interval.

A scrappy game of few clear chances at last produced a goal in the 74th minute.

Everton felt aggrieved as they appealed in vain for a foul on Pickford by Michail Antonio in an aerial challenge that resulted in a corner.

“I have a problem because I am from Spain and normally in Europe, the six-yard box is to protect the keeper,” Benitez said.

“When you have a player blocking the keeper in the six-yard area it is a free-kick.” 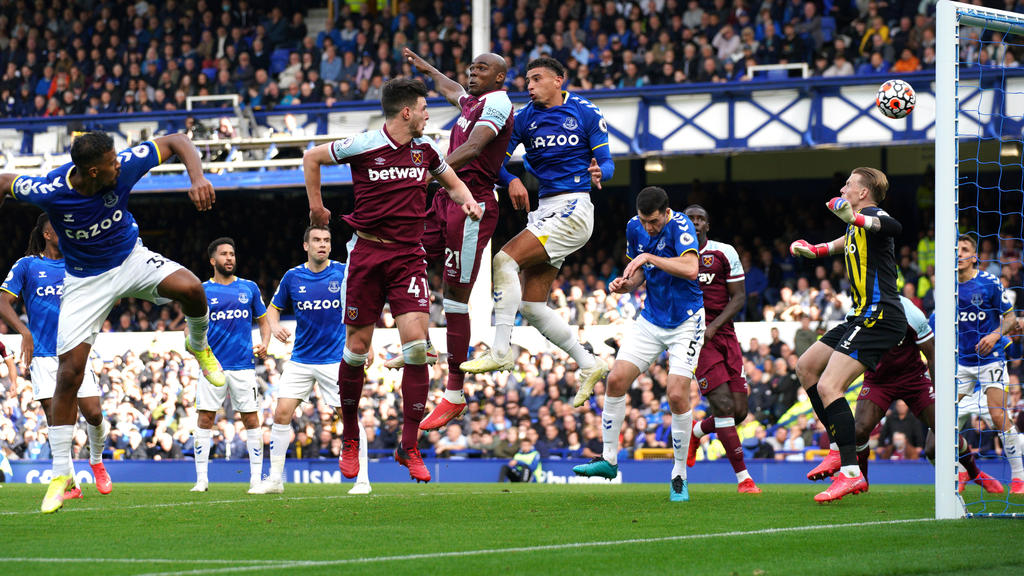